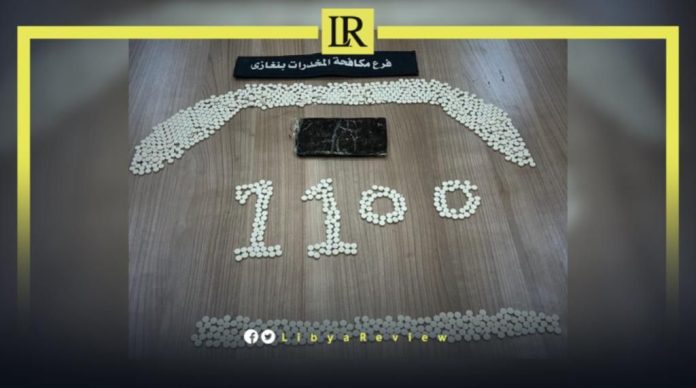 On Monday, Libya’s Anti-Narcotic Drugs and Psychotropic Substances Agency said that they had seized 1,100 Captagon pills in Benghazi, smuggled in from surrounding areas. As well as a large piece of a reddish-brown substance, suspected of being hashish.

In a statement, the Anti-Narcotic Agency said that it had received reports that a resident of Tobruk was smuggling in some narcotic substances to sell in Benghazi.

It added that the suspect was caught red-handed, in possession of the drugs. As well as confirming that it had taken all legal measures against the man, and referred him to the Drug Control Prosecution.

This was part of the efforts exerted by the Anti-Narcotic Drugs and Psychotropic Substances Agency to impose security, and the rule of law across the country.

In May, the Head of Libya’s INTERPOL National Central Bureau, Adel Bentaleb claimed that there has been a marked increase in drug traffickers using Libya as a transhipment point. This includes drugs from as far as South America.

“While many of these drugs are neither produced nor consumed here, this has not spared us from the violent crime inevitably wrought by such activity, which we are determined to combat alongside INTERPOL,” Bentaleb said.

INTERPOL has said drugs worth nearly €100 million euros have been seized in Africa and the Middle East, during a large international police operation in March and April of 2021.

Recently, the National Commission for Human Rights in Libya (NCHRL), denounced reports of killing and excessive use of force against migrants and asylum seekers in the country.

In a statement, the NCHRL affirmed the right of the Libyan state to regulate and control the entry and stay of immigrants and foreigners present on its territory.

In September, the Greek Coast Guard attempted to inspect a Comoros-flagged vessel, suspected of smuggling Turkish weapons to Libya, according to the Greek City Times.