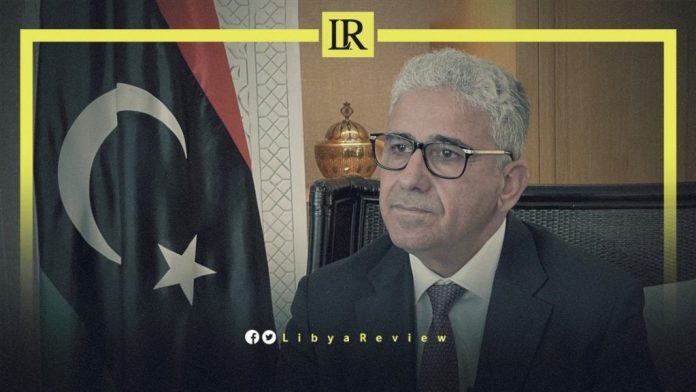 On Monday, the Libyan Parliament-designated Prime Minister, Fathi Bashagha called on Tunisia and Algeria to “reconsider their foreign policy towards Libya, and not be drawn into the biased practices of the Tripoli-based, Government of National Unity (GNU) headed by Abdel-Hamid Dbaiba.”

Bashagha reaffirmed that the GNU’s legal and administrative mandate, set by the legislative authority has ended. This is in accordance with the provisions of the Constitutional Declaration, and the Libyan Political Agreement.

He also called on Arab states to “support the country’s unity and urge for reconciliation between the Libyan parties, and to back a Libyan-Libyan settlement, which will pave the way for electing a unified executive authority in the country.”

Bashagha hailed the decision of some Arab countries to not participate in the consultative meeting of Arab Foreign Ministers, hosted by the GNU.

The overwhelming majority of Arab countries boycotted the ministerial meeting hosted by Libya on Sunday. Only five of the Arab League’s 22 members sent their Foreign Ministers, and even the bloc’s Secretary-General failed to attend.

The snub underlines Arab divisions over the Tripoli-based government, whose legitimacy is contested by Bashagha in the war-scarred east.

Najla Al-Mangoush, the GNU FM condemned what she called “attempts by certain sides to crush Libyans’ desire to transform Arab solidarity into a reality.”

Libya, which holds the rotating Presidency of the organization, is “determined to play its role in the Arab League (and) rejects any attempt to politicize the League’s founding documents,” she said.

Libya fell into a decade of violence following the 2011 overthrow of late Libyan leader Muammer Gaddafi in a NATO-backed rebellion.