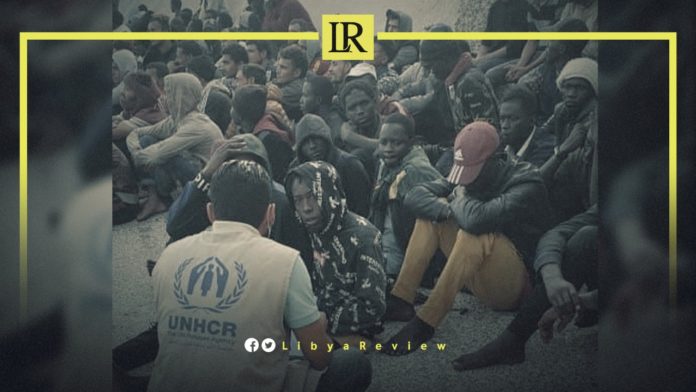 On Saturday, the Libyan Coast Guard managed to intercept 198 migrants on aboard of two boats last night and brought them back to Libya where they disembarked in Zawiya and in Tripoli, according to the United Nations High Commissioner for Refugees (UNHCR).

“The UNHCR and International Red Cross (IRC) teams attended operations and provided food, water, and urgent medical assistance to survivors suffering from hypothermia and dehydration,” the UNHCR said via Twitter.

In a statement, the UNHCR urged the Libyan government to immediately address the dire situation of asylum seekers and refugees in a humane and rights-based manner.

The Libyan Anti-Illegal Immigration Department on Friday said 128 migrants were voluntarily deported from Libya to their country of origin.

Raids and arbitrary arrests by the authorities this month targeted areas largely populated by refugees and asylum seekers that resulted in several deaths, and thousands detained.

“Since the start of the security raids and arrests by the Libyan authorities in October, we have witnessed a sharp deterioration in the situation facing vulnerable asylum-seekers and refugees in Tripoli,” said Vincent Cochetel, UNHCR’s Special Envoy for the Western and Central Mediterranean Situation.

“The Libyan authorities must come up with a proper plan that respects their rights and identifies durable solutions.”

“Many have been left homeless and lost all their belongings as a result of the security operation and are now sleeping in the cold and in a very unsafe environment. This is utterly unacceptable,” said Cochetel.

UNHCR and Doctors without Borders (MSF) said the raids left more than 5,000 detained.

Since weeks, around 2,000 African migrants have been protesting outside the headquarters, demanding to deport them to a third country through the Voluntary Humanitarian Return program.

The UNHCR has welcomed the authorization to restart humanitarian evacuation flights but warns that it is not enough.

“This is a positive development for some of the most vulnerable refugees, who have been waiting anxiously for many months to depart,” said Cochetel.