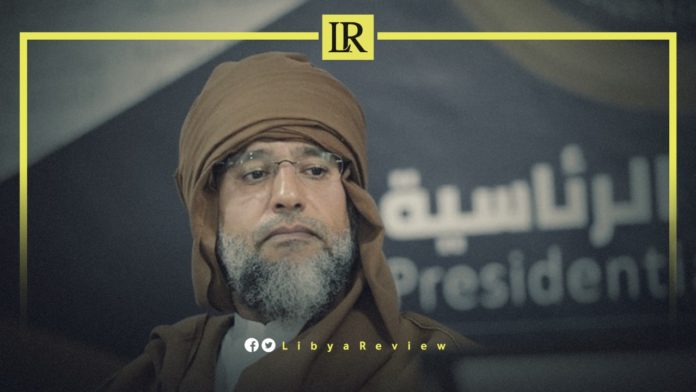 The son of long-time, leader Moammar Gaddafi, Saif Al-Islam, submitted his candidacy papers to the High National Election Commission (HNEC) in order to run for the upcoming presidential elections. These are planned to be held on December 24th.

On Sunday, Saif Al-Islam appeared inside the headquarters of the HNEC in the southwestern city of Sebha. He was surrounded by some of his supporters, including his lawyer, Khaled Al-Zaydi.

Last month, Chairman of Libya’s HNEC, Emad El-Sayeh, said Saif Al-Islam Gaddafi has the right to run for the upcoming presidential elections. In a discussion session via the Clubhouse, El-Sayeh noted that the law issued by the House of Representatives does not prevent the candidacy of Saif Al-Islam.

The HNEC’s Emad El-Sayeh said the commission adopted new measures to prevent electoral fraud in the national elections. He added that the commission will start issuing electoral cards to voters and stressing that they are handed over to their owner.

“It would be a very huge logistical operation, even complicated than updating the voter register, as it is a sensitive and accurate process, and the entire electoral process depends on it,” El-Sayeh explained.

On the other hand, Libyan Parliament Speaker Ageela Saleh said in October that the House of Representatives (HoR) will not prevent any Libyan who meets the conditions to run for elections. He noted that Gaddafi’s son can run for elections “if he meets the legal conditions.”

Saif Al-Islam was released in June 2017 after more than five years in detention.

“However, Saif Al-Islam is wanted by the International Criminal Court, he can run for presidency; because the elections law stipulates that the candidate should not be finally convicted by a Libyan judiciary,” El-Sayeh explained.

In March 2021, Libya’s Supreme Court ruled to overturn the death sentence handed down against Saif Al-Islam.

Saif Al-Islam Gaddafi has recently appeared in an interview with the “New York Times”, and hinted to a return to political activities. He also hinted to the existence of rapprochements and alliances with other Libyan parties during the coming period.