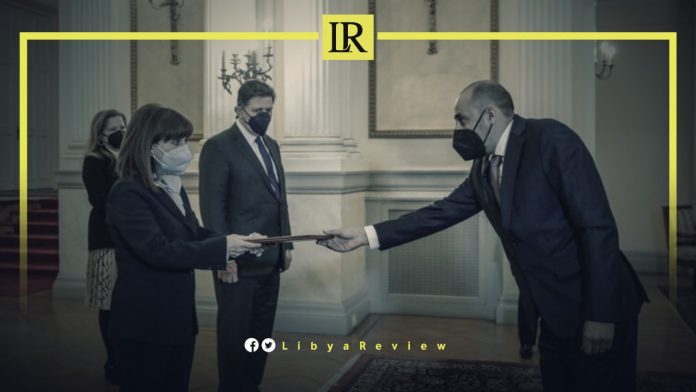 The Alternate Foreign Minister, Miltiadis Varvitsiotis and the General Secretary of the Hellenic Republic Presidency, Ambassador Vassilios Papadopoulos attended the ceremony, according to Greek City Times.

Head of the Libyan Interim Presidential Council, Mohamed Al-Mnifi was the former Ambassador to Greece, and was expelled in December 2019. This came as the former Government of National Accord (GNA) signed a maritime-border memorandum with Turkey. Greece denounced the agreement, describing it as illegal.

Dendias called on Turkey to immediately recognise the nullity of the maritime agreement. He described Turkey’s stance on Greece as, “the epitome of irrationality.”

He also stressed that Athens is committed to peace and stability in Libya, and in supporting the principle of non-intervention in its domestic issues.

In 2019, the Libyan government and Turkey signed two agreements on military cooperation and maritime boundaries in the Mediterranean sea. The military agreement aims at ensuring the protection of Turkey’s interests in Libya, strengthening bilateral ties, and allowing Ankara’s direct intervention in the country.

He underlined that the remarks are “further proof that Greece prefers tension by seeking help from third parties and creating artificial alliances against Turkey, instead of resolving bilateral issues and developing relations through an honest and meaningful dialogue.”