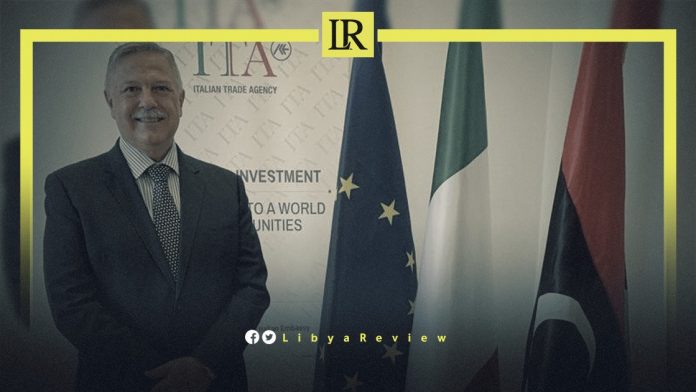 The Italian Trade Commissioner, Romano Baruzzi said Italy’s exports to Libya grew in the first quarter of 2022 by 52.3% compared to the same period of the previous year. This had an export value of €370.60 million euros.

In remarks to Libya’s Sada newspaper, Baruzzi pointed out that imports from Libya grew by 116.44% worth a total of €2.07 billion euros.

Baruzzi confirmed that trade between Italy and Libya in 2022 exceeded €2.44 billion euros, an increase of 103.43% compared to the same period of the previous year, and a market share of 20.71%.

In March 2022, the Italian Embassy in Libya said that exports to Libya increased by 37% in 2021. According to the Italian Trade Agency (ITA) the total trade exchange value between Italy and Italy has reached €6.8 billion. “Italy was the first trade partner of Libya with about €5.6 billion value and first destination of Libyan export,” the Embassy said.

These positive signals, combined with the Italian government’s support for the Libyan economy during this delicate phase of political transition, have pushed the ITA to reopen its office in Tripoli.

Notably, Head of the Foreign Affairs Committee in the Libyan Parliament, Youssef Al-Agouri urged Italian companies and city planners to participate in the reconstruction of the country. This came in his speech during his participation in a workshop on “Reconstruction of the Old City of Benghazi,” organized by the Benghazi Municipality, and the Italian Consulate.

Libyan officials and investors from the public and private sectors, local and foreign businessmen, and representatives of international organizations participated in the event. “Stability in Libya now helps to rebuild, establish, and develop infrastructure in all Libyan cities, and Italy is one of the leading countries in this field,” Al-Agouri said.