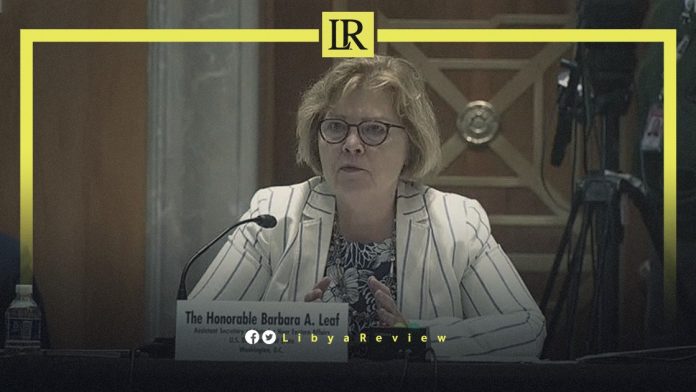 United States (US) Assistant Secretary for Near Eastern Affairs Barbara A. Leaf stated that Washington continues to seek, in cooperation with Egypt and other countries in the region, to end the conflict in Libya and hold elections.

In press statements during her visit to Cairo, Leaf said that the US and Cairo share many concerns and goals about Libya. She pointed out that the events in Libya during the past decade had an impact on Egypt’s national security and borders.

The American diplomat added, “the US and Cairo held many discussions on the Libyan situation, the most recent of which was the meeting of the American and Egyptian foreign ministers in New York, on the sidelines of the UN meetings. It was a good opportunity to exchange views, and of course, I found a similar opportunity here in Cairo. We discovered during the past two days that we are not far from Cairo as we imagine with regard to the Libyan issue.”

The US official stressed that there is “a real opportunity for millions of Libyans to go to the polling stations, elect their government, have a unified army and that all Libyans benefit from the resources of their country.”

She continued, “we in Washington do not respect much the idea of a particular government designating areas of influence.”

Leaf continued, “we are fortunate that the new UN Special Envoy, Abdoulaye Bathily, knows Libya and the conflicting parties in it well, and coordinates between the active international forces, and Egypt is a major part of it.”

“The transitional government in Libya should push for the election of a government that represents the Libyan people. Work must be done on the democratic system in Libya,” Leaf noted.

“If Al-Dbaiba is not willing to manage this, he should step aside like the others, and he is free to make his choices, as the steps must be implemented, otherwise we will not see any change.”