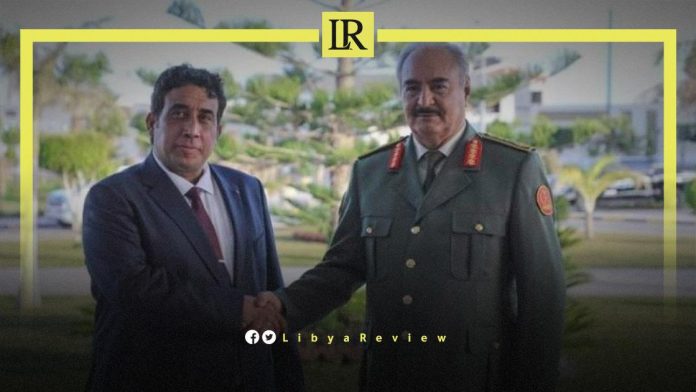 On Monday, the Commander-in-Chief of the Libyan National Army (LNA), Field Marshal Khalifa Haftar met with the Head of the Libyan Presidential Council, Mohamed Al-Mnifi in Cairo.

Libyan and Egyptian sources confirmed to Asharq Al-Awsat that the meeting, which took place under Egyptian auspices, discussed “efforts to resolve the crisis related to the postponed Presidential and Parliamentary elections.”

The sources, who asked not to be identified, indicated that they also discussed “efforts to unify the military establishment, and the conditions for the LNA to absorb the various militias that remain outside the legitimacy of the state.”

Al-Mnifi sought to persuade Haftar to support his project of holding a meeting under his supervision, between the Speaker of the Libyan Parliament, Ageela Saleh and the Head of the High Council of State (HCS), Khaled Al-Mishri. This was to secure an agreement on the constitutional basis for elections, and the national reconciliation project that the Presidential Council recently launched.

According to local media reports, the meeting addressed ways to strengthen the calm on the ground, according to the ongoing ceasefire.

This is the second meeting between the two officials. The first took place on 11 February 2021, at the Al-Fadil hotel in Benghazi. Haftar expressed the LNA’s support for the peace process, and the effort of the army to preserve democracy and the peaceful transfer of power.

This meeting follows the one, also held in Cairo, between Saleh and Al-Mishri, which concluded with a joint statement on a consensus on the constitutional roadmap. This would restore dialogue between the two chambers seeking consensus on the legal basis for holding Parliamentary and Presidential elections in Libya.

It should be remembered that the preparatory meetings of the National Reconciliation Conference began on Sunday. This took place in the presence of Al-Mnifi and the representatives of the African Union, with the participation of several ambassadors, members of the Parliament and the HCS, and sheikhs and notables from various regions.

The Presidential Council is engaged in the National Reconciliation project, and has expressed that all national political bodies must undertake concrete actions, in support of peace among Libyans. It underlined that “the completion of this project, in addition to the constitutional basis, is a fundamental pillar for realising the aspirations of the Libyan people to choose their own representatives through elections.”