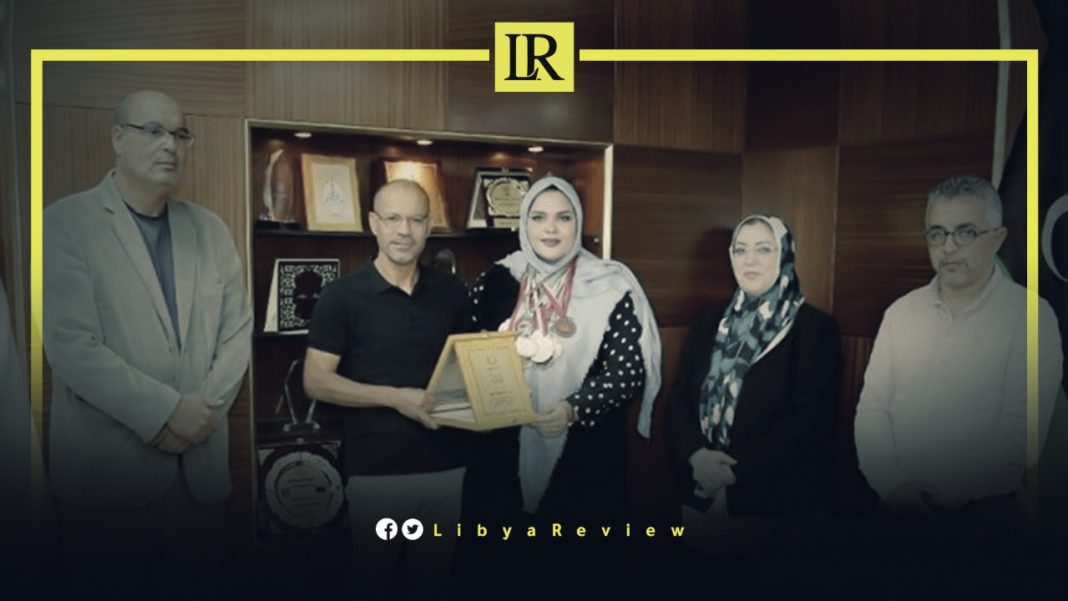 The Ministry of Sports honored female athlete, Ritaj Al-Sayeh, after she was crowned with the golden necklace in the Arab Athletics Championships, the discus throw category, which was held in Tunisia.

This came during a ceremony organized by the Ministry of Sports in the presence of the Undersecretary for Club Affairs, Jamal Abu Nawara. The event was also attended by Houria Khalifa Miloud and Secretary-General of the Athletics Federation, Mohamed Al-Aslam.

Abu Nawara presented the Ministry’s shield to the Libyan athlete in appreciation of her achievement in the Arab Athletics Championships, her victory over the ranks and her ascension to the podium in first place in the Arab world.

In his speech, Abu Nawara explained that the player, Ritaj Al-Sayeh, was expected to become an international champion. This is due to her commitment to training and instructions, indicating that the achievement made by the player made all Libyans feel that they are close to achieving a global result.

Recently, Libya won the bronze medal in the World Shooting Championship, which kicked off at the El-Remaya Square in the Giza Governorate in Egypt.

The Libyan team, consisting of the trio of Osama Abu Khdeir, Miftah Al-Mushahi and Arhuma Mohamed, won the bronze medal with 48 successful throws.

The tournament is held under the auspices of Egypt’s President Abdel Fattah El-Sisi. It was hosted by Egypt from October 11th to 18th, with the participation of 350 male and female shooters from 15 Arab and foreign countries.