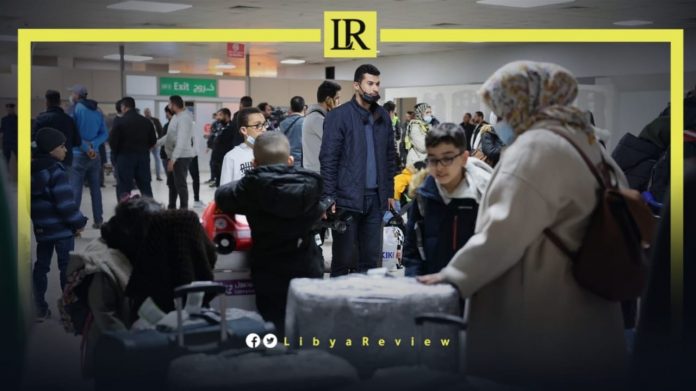 On Thursday, 165 Libyan nationals arrived at Tripoli’s Mitiga International Airport, after they were evacuated from Ukraine through Slovak territory.

In a statement, the Libya Ministry of Foreign Affairs stated: “A plane belonging to Afriqiyah Airways took off from Slovakia. The rest of the Libya community in Ukraine will be evacuated in succession and batches, sequentially over the coming days, until the last person is evacuated to Libya.”

The Slovak authorities confirmed that they granted entry visas to Libyan citizens who arrived from Ukraine, to facilitate their return home. The Libya Embassy in Kyiv called on the Libya nationals to quickly leave the country, as the security situation continues to deteriorate.

On Tuesday, the Charge d’Affairs of the Libyan Embassy in Ukraine, Adel Bin Issa stated that more than 1,500 Libyan nationals who were stuck in Ukraine, have managed to cross the borders.

He announced that the embassy is planning to evacuate a large number of citizens on Wednesday.

On Monday, the Libyan Embassy in Ukraine announced it has been temporarily moved from Kyiv, to the western city of Lviv, near the Polish border.

Bin Issa added that the move was a result of the military operations, and the deterioration of the situation in Kyiv. The step follows other Arab and foreign embassies, “in order to facilitate the provision of the best consular services, and the necessary facilities for our citizens, until the situation stabilizes.”

“I will remain at the Embassy in Kyiv until the last Libyan citizen leaves the capital and its suburbs,” he said.

Bin Issa announced on Saturday that they have begun the evacuation process of some Libyan families and students.