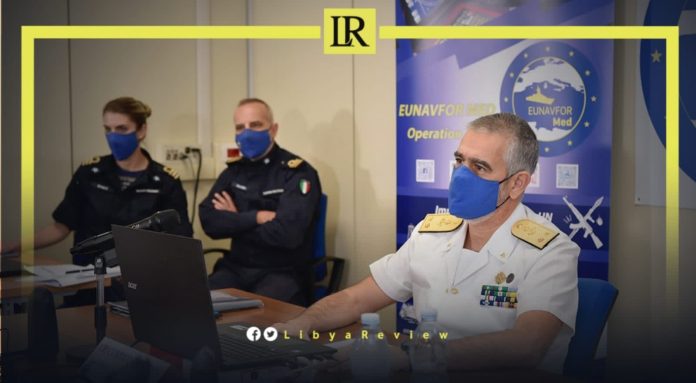 On Thursday, the Commander of the EU’s operation EUNAVFOR MED IRINI (commonly known as IRINI), Admiral Stefano Turchetto said that he is currently conducting a study to make the measures to combat oil smuggling in Libya more decisive.

In an interview with the Italian news agency, Nova, Turchetto stressed, “In this particularly turbulent political phase in Libya, where two competing political parties are battling for power, the control of any illegal exports of crude oil becomes critical.”

He added that the non-passage of its revenues via the National Oil Corporation (NOC) may fuel instability in Libya, leading to an increase in illegal human trafficking. As well as arms smuggling to opposition factions, threatening the fragile ceasefire in place.

He confirmed how important the current operation is, given the volatile state of Libyan politics.

Admiral Turchetto said that IRINI was not created to only bring stability to Libya and the Mediterranean, but to the wider Sahel and sub-Saharan region. “Operation IRINI is currently one of the EU’s most important tools in helping stabilize Libya. It is there to implement the resolution from the UN Security Council.”

Part of the mission is also to monitor migration from the Sahel region to Libya, and onwards to Europe. Another part prevents any potential illegal oil exports, which could fuel instability. Unrest in Libya, according to Turchetto “also creates the conditions for human trafficking and arms smuggling. As warring factions try to gain an advantage, and an income in order to fight their wars.”

“The situation in Libya is very tense,” he told Nova news. “Libyan security is tightly connected with the security situation in the Sahel and vice versa. So IRINI’s work in stopping illegal trafficking operations can have reverberations a long way from the Mediterranean, where the mission mostly operates.”